Chess is one of the most popular strategy board games in the world. For a long time, chess has been considered as a prestigious (прести́жный – prestijny) sport, but accessible to everyone (досту́пный для всех– dastoupny dlia vsekh). It can be played anywhere: at home, in public areas (в обще́ственных места́х – v abshestvennikh mestakh), in a club, at school or on the internet, against another player or a computer. Chess has inspired numerous writers, painters and directors over the centuries.

These days, we only see elderly people (пожилы́е лю́ди – pajilye liudi) play chess in parks, but it is not due to a decrease of popularity of chess, but because a vast majority of young players play it on the internet, via their mobile phone (моби́льный телефо́н – mabilny telefon) or their computer.

Chess is said to have been invented in Asia around the 7th century, although we don’t have any trustworthy information about the true origin of this game. Later, the Arabs started playing it and spread it throughout their conquests. This way, chess arrived around the 11th century in Muslim Spain, and then reached the Christian kingdoms. However, since the beginning of the 20th century, most of the world chess champions (чемпио́ны ми́ра по ша́хматам – tchempiony mira po chakhmatam) are from USSR. Among the 11 world champions between 1921 and 1990, 7 were soviets! Indeed, since the 1930s, numerous chess clubs and schools were created in URSS, which contributed to the emergence of soviet Grandmasters (сове́тскиe гроссме́йстеры – savetskie grossmeistery) such as Garry Kasparov, Boris Spassky and Anatoly Karpov. But the Russian’s passion for chess goes back a long time before that: Ivan the Terrible (Ива́н Гро́зный – Ivan Grozny), Tsar of Russia from 1547 to 1584, died while playing chess!

Chess is played on a chessboard (ша́хматная доска́ – chakhmataya daska) with 64 black and white squares. 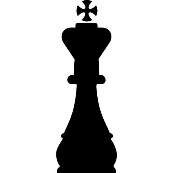 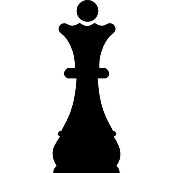 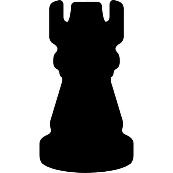 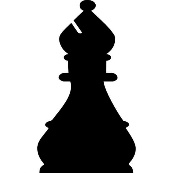 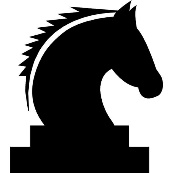 The pieces are set out as shown: 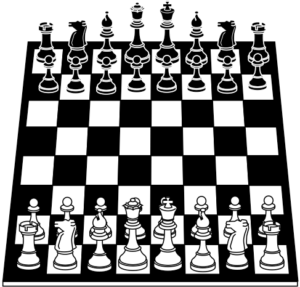 One player has the white pieces, the other one has the black pieces. The player with the white pieces always starts the game. Then, each player plays in turn (игра́ть по о́череди – igrat’ po otcheredi).

The objective of the game (цель игры́ – tsel’ igry) is to “checkmate” (шах и мат – chakh i mat) the opponent’s king, which is the most important piece. A checkmate occurs when the king is threatened by one or several opponent’s piece(s) and the player hasn’t any possibility to save it. A checkmate immediately puts an end to the game. When a king is threatened by an opponent’s piece but can be saved, then the situation is simply called “check”.

A game can end in a draw (ничья́ – nitshia), after an agreement between the players, or when both players don’t have enough pieces left, which makes checkmate impossible (for instance, king against king). When a player has no legal move to make and his king is not in check, then the game ends in a draw as well, thus called stalemate (Пат – pat). 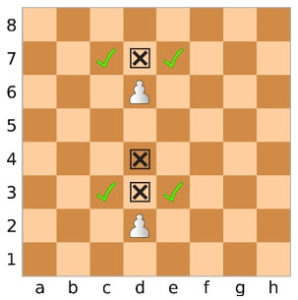 The pawn can move forward only one square (клето́чкa – kletotchka) but can move two squares on its very first move. It can only capture an opponent’s piece on a square diagonally forward (see these signs the picture). 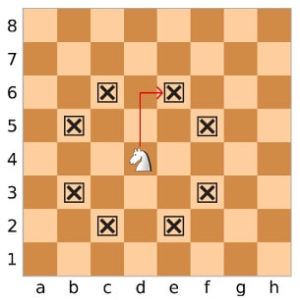 The knight is the only piece than can leap over other pieces. Its movement is particular (осо́бый – assobi) as it advances in a “L” shape, two squares vertically (вертика́льно – vertikalna) and one square horizontally (горизонта́льно – garizantalna) or the reverse. 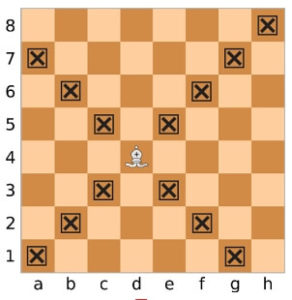 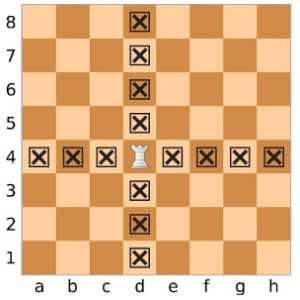 The rook can move several squares at a time, but only vertically and horizontally. 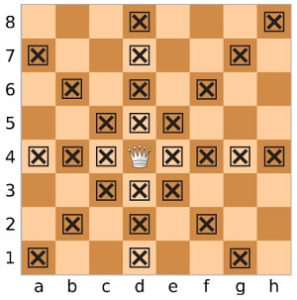 The queen can move several squares in any direction (vertically, horizontally, diagonally). That’s why it is the most powerful piece of the game! 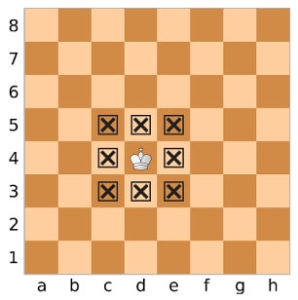 The king can move one square in any direction. You can’t move it to a case that is in the range of (в преде́лах досяга́емости – v predelakh dasiagaemasti) an opponent’s piece, but you can capture an opponent’s piece if it was next to the king and if it is safe (безопа́сно – bezapasna) to do so. 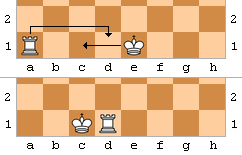 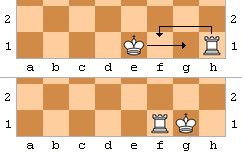 Castling is the only move which allows to move two pieces at the same time (the king and the rook). The king moves two squares towards one of its rook, then the rook leaps over the king and is placed one square from the king, on the opposite side (на обра́тной стороне́ – na abratnay staranie). Castling only can be used when:

– the king and the rook never moved before

– there is no piece between the king and the rook 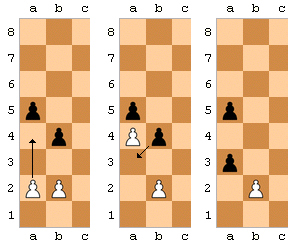 En passant is a special move which allows a pawn to capture an opponent’s pawn in a particular way, and only under certain conditions. In this example, the white pawn moves two squares forward because it is its very first move. The black pawn in b4, rather than going one square forward, moves one square diagonally, passes behind the white pawn and captures it, even if it was not on the same square. Here are some rules (пра́вила – pravila) about the move en passant:

– This move is only possible when the opponent’s pawn moved two squares forward.

– This move can only be done right after the 2 squares movement of the opponent’s pawn.

– The player can decide not to capture en passant, therefore this move will not be available anymore for that very piece. 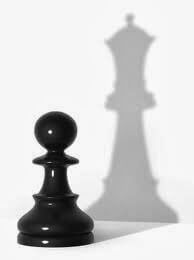 When the pawn reaches the last rank (where were the opponent’s pieces at the beginning of the game), the pawn is promoted. It must be changed into a queen, a rook, a bishop or a knight. In most cases (в большинстве́ случаев – v balchinstve slutchaev), the player chooses to promote his pawn into a queen, as it is the most powerful piece (са́мая си́льная фигу́ра – samaya silnaya figura).

Finally, you should know that you can choose to limit the reflection period (ограниче́ние вре́мени обдумывания ходов – organitchenie vremeni obdoumyvaniya khodov) of each player from several seconds to several minutes to make a move, or you can play without time limit.

From now on, you know how to play chess! As you may have noticed, the chess rules are quite simple. However, as in any sport, it takes years of practice to achieve a good level!