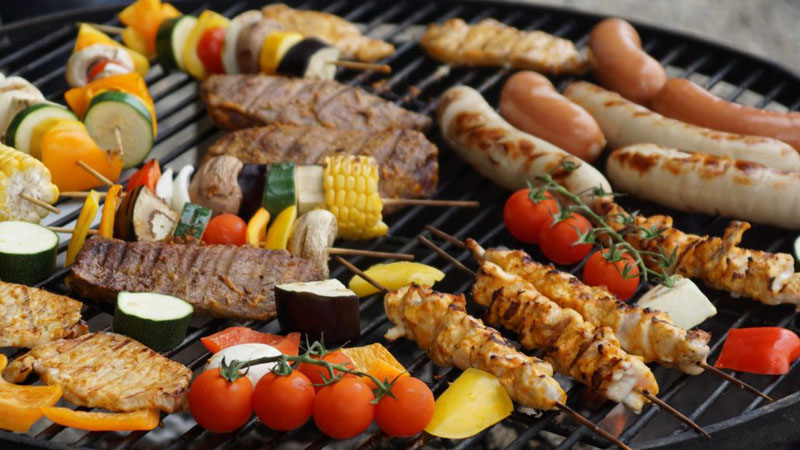 If you’re planning to do an internship at CREF when the days are nice and sunny, you’re going to undoubtedly be witness to an amazing sight in the parks here. As soon as the snow begins to melt and the weather becomes warm, groups of friends and families gather around portable barbecue grills everywhere. In some places the grills are so numerous that they fill the air with a hazy mist (туман – tuman), lending the whole scene a romantic quality. You have to understood, a picnic (пикник – picnic) without kebabs (шашлыки – shashliki), it’s just…. niet! Like the Russian sauna or picking mushrooms, the art of the “shashlik” is an integral part of Russian popular culture. More than just a part of the culture, actually, it is its own universe. On the Internet, for example, one can even find the barbecue encyclopedia (шашлычная энциклопедия – shashlichnaya entsiklapedia), which should give you an idea of how big a deal it is! CREF would like to provide you with the right words, a tried and tested recipe (рецепт – retsept) that has proven itself many times over, in order to increase the esteem your Russian friends hold you in when you invite them out for a barbecue (пригласить на шашлыки – priglasit na shashliki).

Vegetarian skewers (вегетарианские – vegetariansky) and those of fish (рыбные – rybnye) do exist, although meat skewers are the focus of people’s passions, especially when sharing one’s favorite recipes, many of which can be easily found on the Internet. If the quality (качество – kachestva) of meat is important to them – aficionados (любители – lioubiteli) will only buy it at the market – (на рынке – na rinke); the secret to barbecue success, dare we say it, lies in the marinade (маринад – marinad), a regular source of fiery debates (острые дебаты – austri debatiy). Sunflower oil (подсолнечное масло – padsolnechnoye masla) or olive (оливковое – alivkavaye)? To salt (солить – soleet) or not to salt? Finely ground pepper (мелкомолотый перец – melkomoloti perets) or coarsely ground (крупномоло́тый пе́рец – kroupnamaloty péréts)? Here is what we recommend.

Before preparing the meat, cut it into pieces (нарезать кусочками – narézat kussochkami) that are neither too thick (не слышком толстые – ne slishkom tolsty) – you need to be able to cook them evenly – nor too thin (не слышком тонькие – ne slishkom tonki) – you should be able to skewer them without any breakage. Do not remove the fat (сало – sala) because it helps in the cooking process. Finally, make sure that the meat is dry because the grill has an aversion to water.

On one barbecue expert’s blog, who weighed every gram of meat for his skewers, we read that adding salt does not reduce the juiciness found in raw meat. On the other hand, if one adds salt after applying the marinade or while grilling, the salt has no time to properly penetrate the meat. In this regard, at least, the debate is closed (спорить не о чем – sporit ne a chom). When adding spices (специи – spétsii) to the meat, they should be added in the following order (в следующем порядке – v sléduyushem pariadké): coarsely ground black pepper, coriander seeds (семена кориандра – semena kariandra), basil (базили́к – basilik) (do you know that Russian basil is most often purple in color?), thyme (тимьян – timian), often called (чабрец – shabrets), cumin (кумин – kumine), also called (зира – zira), bay leaves (лавровый лист – lavrovy list), paprika (паприка – paprika), and onion (лук репчатый – louk reptchaty).

Then, of course, one has to contend with fans (сторонники – staronniki) of olive oil and those of sunflower oil. The latter seem to be in the majority and their main argument is that olive oil is not suitable for too much frying. It is up to you to decide, but tradition seems to favor sunflower oil, which is more widespread (распространена – rasprastranena) in Russia.

Once the oil has been added, you can add some lemon juice (сок лимона – sok limona), but no vinegar (уксус – ouksous), please.

The meat, once prepared (подготовлена ​​- padgatovlena), must be stored in a cool place and, ideally, should be tenderized by a heavy object. You should leave the meat to marinate (маринова́ть – marinavat’) overnight, but if you’ve bought meat that’s very fresh (све́жее – sviézhé) in the morning and you marinate it right away, you can prepare your kebabs that very same evening. It is also recommended to thread the meat through the skewers (шампуры – shampoury) at home. We also recommend heating the skewers in a fire so that when you pass them through the meat, they cauterize it and thus prevent the juices (сок – sok) from leaking out. What a dilemma (дилемма – dilema)!

Has all this made you hungry? Patience: for a successful barbecue, the barbecue grill (манга́л – mangal) also plays an important role. Of course, you are not one of those novices who believes that any metal box will do the trick! The barbecue must have ventilation holes and suction in sufficient quantity and of good quality, but not too much, and with thick-walled insulation so that the heat is fully focused on cooking the meat and does not escape. Finally, make sure not to barbecue the meat over the fire (огонь – agog=n), instead, do it over the embers (красные угли – krasnye ugli).

If you don’t have a yard, you are going to need to find the ideal spot (идеальное место – idéalnoi miesta) for your barbecue. City dwellers are more than happy to go to the parks to barbecue their kebabs. However, in order to avoid paying a fine (штраф – chtraf), make sure to find a dedicated sport (специально отведенное место – spetsialno otvedionnoe miesta) and arrive early, because these places are very popular (востребованы – vastrébavany)!

When getting ready to eat, you can lay out some fresh vegetables (свежие овощи – svézhié ovashshi) – or perhaps salted – on your picnic table, as well as fresh herbs (зелень – zélién) to complement your kebabs. Specialists strongly advise against pies (пирожки – pirazhki) and other heavy dishes, arguing that the barbecue should be the focus of the feast. If you are not completely certain of your barbecue skills, you could still work on a plan B …

If you want to be a real “shashlichnik” (шашлычник – yes, the word exists), you’re going to need to manage the grill, make sure the embers are hot enough, extinguish the flames and keep everyone away from the grill until the meat is cooked – in Russian we say until it’s ready (до готовности – da gatovnasti). A good meat skewer should not appear burned (подгорелая – podgarélaya), even on the sides, or smoked (копчëнная – kapchionnaya); smoking (копчение – kaptchénié), by the way, is its own world in Russian culture. Finally, when the time comes to serve your first batch of skewers, you will surely have your moment of glory.

But be careful during the FIFA Football Championships, because it seems that some regions, focused on ensuring public safety, have decided to ban barbecuing in the countryside (на природе – na prirodié), which has continued to upset the “shashlichnik” blogosphere no end. So be respectful of the legislation and enjoy the tasting!